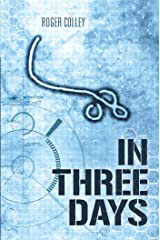 Two zealots plan to destroy America by spreading the Ebola virus, but Michael Reynolds stands in their way, desperately searching for answers.

The attack date is another 9/11. The year is 2021. Two disillusioned zealots plan to end world violence once and for all by stripping the powerful United States of its electric power and communications and possibly the lives of its citizens. Their weapons are a nuclear electromagnetic pulse bomb and a modified Ebola virus capable of airborne infection.

During the nations global warming crisis of 2014 to 2018, the U.S. capital was temporarily moved from Washington, D.C. to Denver, Colorado. There, Michael Reynolds finds himself again in the midst of terror and turmoil. Over a three-day period in one square mile of Denver, Reynolds must find a way to counter the zealots scheme and save America from utter destruction.

Part of the destructive plot, the young and beautiful Fila also enters the fray, but eventually becomes uncertain of her role. Will she hinder or help Reynolds? If the virus spreads unabated, there is little hope for survival. With no means of communications and with no anti-viral against Ebola, Americans face a tragic Reynolds does not follow the right clues.